What did I learn from this exercise?

1.    The importance of objectives in the EU policy-making process

The impact analysis is structured around a definition of problems that the policy making will address.  During the discussions about the directive, these objectives were enhancing policyholders’ protection and the integration of insurance markets in the EU.

The Commission’s impact analysis acknowledges that there is now a third objective that has been taken into account: fostering growth and recovery in Europe by promoting long-term investment.  In the case of insurance, the main challenges that arise relate to the low interest rate environment and the volatility of asset prices.

2.    A useful summary of how the calibration of asset risk has evolved

The third objective mentioned above has shaped the structure and calibration of capital requirements for assets risk which has evolved over a number of years.  However, it is not easy to see in a succinct way the end product where the answer is set out over a number of articles in the implementing measures.  Surprisingly, this can be summarised in a simple table (below). 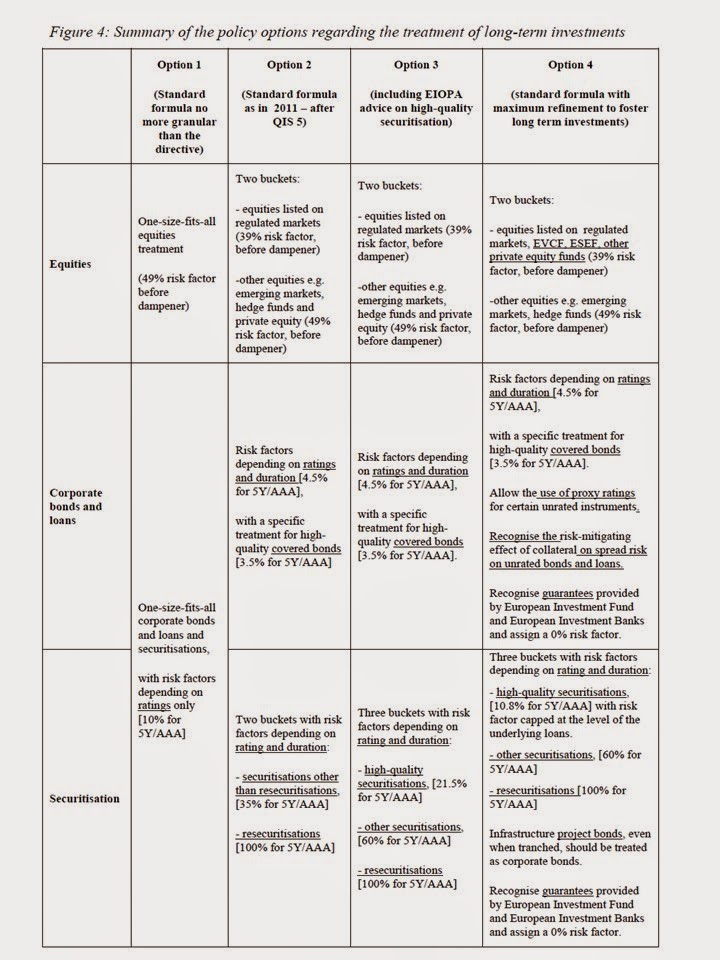 3.    The scope of impact analysis remains a tricky issue

The Commission seems to have overcome the challenge of undertaking an impact analysis that seeks to cover the impact of all rules.  The Commission states,

“The options assessed have been selected to cover the most important and representative issues from each of the three pillars of Solvency II and each of the areas of the objectives and problem trees. The areas that are merely technical, have been settled in the Directive or are uncontroversial are not assessed in detail …”

This is reasonable and can result in a more productive use of scarce analytical resources but it can also have unintended consequences.  As far as I can see, the impact analysis did not cover the treatment of long-term guarantees.  I am frankly not sure if this is because it was settled in the Directive or because it turned out to be uncontroversial.

4.    The relative priorities of the Commission: the importance of reducing over-reliance on ratings

The concern about over-reliance on ratings is not new if you have been following the development of Solvency II.  However, given the breadth of Solvency II and the focused impact assessment, I found it surprising that the Commission went out of its way to include a full two-page annex summarising the requirements aimed at reducing reliance on external ratings in the risk management of insurance “such as

The Commission’s impact assessment notes that one of the issues that emerged from the QIS5 was the application of a limit to the amount of Tier 2 capital (i.e. debt) that would be allowed.  This issue has remained unclear since then.

Interestingly, if all you read is the relevant section of the impact analysis on pages 38 to 46 which also summarises EIOPA’s recommendations, you could be forgiven for thinking that the limit would not apply.  It is only the summary on pages 50 to 51 that suggested that I might need to reconsider my initial views.  Indeed, the draft implementing measures clarify that the sum of Tier 2 and Tier 3 capital must not exceed 50% of the SCR, which is an interesting development.

This illustrates one of the key operational challenges of impact analysis: the need to keep up with the policy.

Posted by Crescendo ERM at 20:30 No comments:

The Three Lines of Defence: An Enforcement Perspective

This week there was good evidence that the concept is alive and well.  The FCA issued a penalty to Aviva Investors for failure to manage the conflicts of interests between itself and clients, and between different clients (full paper here).

From a risk management perspective, there were a couple of interesting lessons:

1.  The increased size of compensation paid as part of the enforcement case relative to the size of the regulatory fine; in this case the fine was £17.6m and the compensation to eight funds was £132m.

2.  The FCA has drawn an explicit parallel between failures of the three lines of defence model and Principle 3 which requires that an authorised firm “take reasonable care to organise and control its affairs responsibly and effectively, with adequate risk management systems.”

The articulation of the case looks at the performance of each line of defence and articulates the observed failures which provides a useful checklist.

This post is part of a series of posts on the practical lessons for risk management from enforcement cases.  The posts are all brought together in the page FCA enforcement.
Posted by Crescendo ERM at 08:38 No comments:

Is It FCA Supervision or Enforcement?

One of the observations in my latest post about enforcement (here) was that fines can become a relatively small component of the cost of regulatory enforcement.  This observation was made in a context where, in addition to the fine, the firm had agreed to a number of specific measures which included replacing its executive management team and a comprehensive review of its governance structure.

This week I came across an even better example of the blurring line between formal enforcement and where a firm agrees with the supervisor to a set of measures.  The Times reports that the London office of Deutsche Bank has been put on ‘enhanced supervision’ (here).


There has been no formal statement from the FCA about this case.

This post has been added to the page FCA enforcement in this blog which links all the enforcement cases reviewed.

Posted by Crescendo ERM at 23:06 No comments: